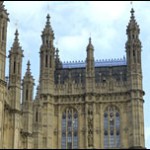 I and other bloggers attended a reception this evening – held in the River Room of the House of Lords, courtesy of the Lord Speaker – to mark the third birthday of Lords of the Blog.   We welcomed many of you who comment regularly on the blog and were free to join us.  Apart from hearing various recommendations, there was also a (low-tech) suggestions box.  It will be interesting to see what suggestions were made for developing the blog.

It was good to see so many faces, even though we did not know what blogging names to put to the faces.  I recognised one or two of those who were present – not least competition winners such as  Jonathan and Dave H  – but otherwise anonymity was maintained.  I was impressed by the relative youth of the audience.   I had to chair another meeting immediately after the reception, so I did not get a piece of the birthday cake.  I am told by one or two of my students, who nobly stayed to get a slice, that it was rather rich.

Since Lords of the Blogs started, we have had over 530,000 page views, with the traffic increasing in recent months.  Over 80% of our audience is UK based, but we also have a good overseas readership, our biggest overseas audience being in the USA, followed by Germany, France, Canada and New Zealand.   There have been more than 1,260 posts and in excess of 15,000 comments.  I gather I have contributed the most posts.   The post attracting the most comments was my recent post on the debate on a Royal Commission on Drugs.

A point I stressed was that the blog is very much a means of two-way communication.  We are keen to keep readers informed of what we are doing and what is happening in the Lords, but we are also keen to get your input.  This can help shape our thoughts and actions.  The blog has been mentioned fifteen times already in the Lords and has been crucial to two of the debates I have initiated, one on public consultations and the other on a Royal Commission on drug use and possession.  Some of the informed comments have also influenced my stance on other issues.

Obviously, not everyone who comments regularly was able to join us this evening, so do feel free to post suggestions.  And do please keep contributing your comments.  We read what you write and learn from it.

← A Prayer for Welfare Reform
Intervention →

26 comments for “A valuable reception”

…was appointed Professor of Government at the University of Hull in 1986 at the age of 35. In 1992 he also became Director of the Centre for Legislative Studies. In 1998 he was elevated to the House of Lords as Lord Norton of Louth. He chaired the Conservative Party’s Commission to Strengthen Parliament. He is co-chair of the Parliamentary University Group and chair of the Commission on Higher Education. From 2001 to 2004 he was Chairman of the House of Lords Select Committee on the Constitution. He is the author or editor of 32 books. He has been described in 'The House Magazine' as "our greatest living expert on Parliament".
More posts by the Author »

Links to the UK Parliament