In the last few days I have suddenly been receiving emails and posts on my Facebook asking about muslims, immigration and the English Defence League. Why are people in my peaceful home town of Weymouth suddenly getting all worked up about these issues?

Weymouth is not a town with very much ethnic diversity. The latest figures show the population to be 96.3% White. The few ethnic minorities in the area are well integrated and mostly long settled. For example there are around just 15 Muslim families in the town and almost all work in the restaurant industry creating employment and as an important part of our local tourist economy. As the local MP the most common concern from them was about recruiting local people willing to do the hard work demanded in their kitchens. But I also met others running a local playgroup, at the local football or at parents evenings at the local school. These people are hard working, peaceful, tolerant and at one with our community.

Within this relative calm there has also been worry on the doorstep about immigration. This appeared fuelled more by the media than by local experience, although there has been a little resentment by a handful towards the Polish community. This recent concern contrasts with the big local issue of the 2005 election when there were big protests at the deportation of the Kachepa family back to Malawi.

This balanced local view has been disturbed by a BBC documentary “My Brother the Islamist“. This was the story of a tree surgeon from Dorset who discovered that his brother had converted to Islam and had been radicalised. The filmmaker appeared to trick his way into the tiny room that functions for a mosque in Weymouth, and some then had the impression that young people were being radicalised here in the town. A recent article in the local paper makes clear that this is not the case, but too late now as the rumour mill is in overdrive. 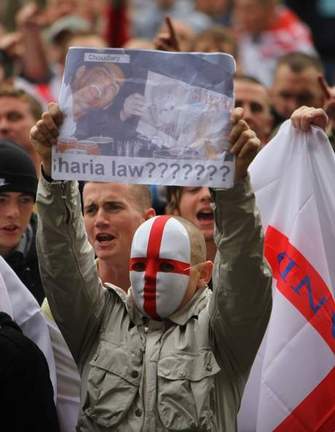 This has now been compounded by the English Defence League organising a demonstration in Weymouth over the Royal Wedding weekend. This is a wholly unwelcome distraction from what should be one of the busiest weekends for the local economy thanks in part to the annual Weymouth Kite Festival.

Not only do we now have the possibility of a great weekend being tarnished but local businesses are worried about the trouble that has been associated with EDL events elsewhere.

Like Jon Cruddas MP, I think the EDL are a bigger threat to British traditions of tolerance than the BNP. At a time of high unemployment, housing shortage and cuts to the welfare state we are particularly vulnerable to the rise of far right fascism. The possibility of that particular poison reaching somewhere as peaceful as Weymouth makes me anxious. That is why I will join others in publicly expressing our opposition to the English Defence League in Weymouth.

← The quiz
Libya and regime change →

21 comments for “Worries In Weymouth”

Lord Knight of Weymouth was the longest serving Schools minister in the last Labour government, he also served as Rural Affairs minister and Employment minister. He attended weekly Cabinet in the year running up to the 2010 General Election, and was made a life peer in the Dissolution Honours List after that 2010 election. Having co-ordinated Ed Balls Leadership Campaign he is now focussing on his role as Shadow Employment minister in the Lords, and as a consultant in education policy internationally. He is also on the board of the Arsenal Fanshare Society, is a vice-President of the LGA and is a trustee of the e-Learning Foundation. Jim is also on Twitter and Facebook.
More posts by the Author »

Links to the UK Parliament